The Real Effects Of The 3-Year SMSF Audit Proposal 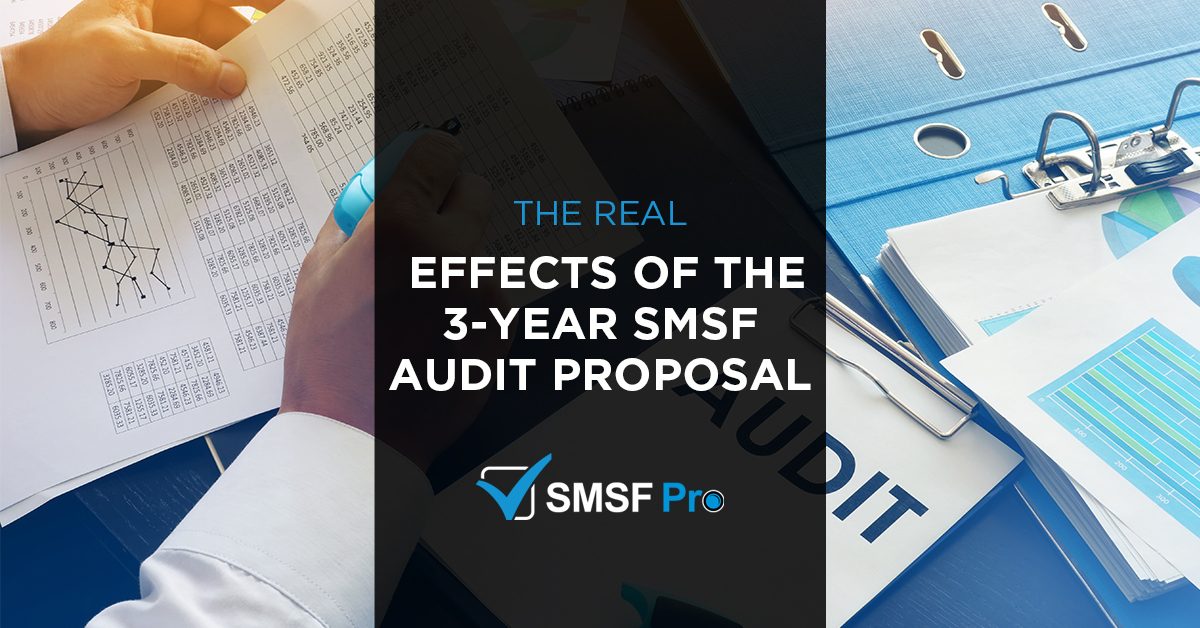 As from July 2019, some SMSFs will qualify for the 3-year audit cycle. It’s bound to create a few struggles that demand new solutions along the way.

The main principle behind this proposal is to reward the SMSFs with a history of compliance and those that have kept good records.

It’s a measure meant to reduce the red tape that trustees have to deal with and it will cause huge ripples in the auditing industry.

At this stage, it isn’t known exactly which audit year will be affected and if there are any expected transitional arrangements.

Some of the SMSFs that will be eligible for the 3-year audit program include:

a) Those with at least 3 years of clean audit reports.

b) A history of timely submissions (SAR). Any SMSF that hasn’t had any late returns in the last 3 years or those that have never submitted late SARs will be eligible.

c) There are specific key events that will affect the timeline of the 3-year audit cycle.

If such an event happens, the SMSF reverts back to the yearly audit and the 3-year cycle restarts again. Some notable events in this case include:

There was a consultation period for the entire proposal that ended on 31st August 2018.

There was integral feedback from various players in the industry regarding the new proposal.

The proposal was introduced because it was meant to reduce the administrative costs for the SMSF trustees accordingly.

Also, it’s expected that the delays in SAR submissions would reduce considerably. It’s a measure to reduce the compliance burden on SMSFs.

The Effect Of The Proposal On Any Other Legislation

Currently, there are some issues with the new proposal knocking heads with the existing legislation.

Also note that the introduction of event-based reporting and TBARs has created some significant benefits.

Now the industry is moving towards real-time processing. It’s a great way to introduce oversight and transparency.

Some players in the industry speculate that the introduction of the 3-year audit process would cause plummeting of the oversight.

The overall industry is expected to change in many ways once the proposal is accepted. Some of the notable changes include the following.

a) Heavy Burden On Auditing – Now auditors will have a hard time conducting accurate and comprehensive audits.

It’s going to be harder to track down 3-year-old data. Some institutions might have a hard time maintaining old data.

Therefore, it will be tough to provide the required supporting documentation when needed.

b) Needed Change For Auditor Workflow – Now, auditors have a better and easier workflow because they have timely access to data whenever they need it.

A 3-year audit cycle is expected to undo such benefits. There will be a notable fluctuation in the workflow because audits will become less frequent.

It will also bring up issues related to document and data access.

c) Less Guidance For The SMSF Trustees – Currently, trustees rely on the guidance of the auditors and their oversight.

If there is any non-compliance, it will happen by accident. The 3-year audit will be less comprehensive than the yearly one.

In conclusion, as much as the 3-year audit cycle is meant to reward the compliant SMSFs, it’s also going to affect the audit processes as mentioned above.

SMSF Pro has years of expertise in the Self Managed Super Fund arena and is able to conduct quick and independent SMSF audits for a flat fee.

Please call us today on 1300 023 374 or message us through our website https://smsf-auditor.com.au/contact/ for all your Self Managed Super Fund requirements.